As they continue their undergraduate studies, several KGSP students have started preparing themselves for careers in research and have made a mark in scientific studies at research centers throughout the United States. Not only are these students gaining invaluable hands-on experience working under the tutelage of skilled professors and researchers, but they are applying the knowledge from their academic coursework in meaningful and potentially groundbreaking ways. The research that the students participate in sometimes results in published works in scientific journals. 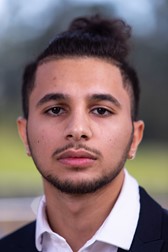 Ali Alfares, a junior at the University of Colorado, Boulder majoring in Mechanical Engineering, has worked on several research studies during his academic career. Each opportunity has contributed to his growing expertise. In the summer of 2021, he was part of Professor Yuebing Zheng’s research group at the University of Texas at Austin.  He contributed to a research paper that Professor Zheng’s group produced. Ali was responsible for reviewing relevant scientific studies and compiling and grouping the relevant data for the Group’s research project. He also added to the text of the outline and article introduction and revised the initial manuscript after its first peer review. The research study, "Optical Manipulation and Assembly of Micro/Nanoscale Objects on Solid Substrates," is expected to appear in iScience this spring.

From his experience, Ali admitted, “I found out that the process of writing a research article from scratch is quite different from the process of making a poster from existing research.” He further stated, “It was a very intimidating task at first, as I had practically no prior knowledge of optical manipulation and no experience reading research articles. I found my previous coursework particularly helpful in understanding the methods and experiments behind the technologies discussed in the articles I read.”

"I am very proud of Ali for the tremendous accomplishment of contributing to research submitted for publication. This is a result of Ali’s hard-work and determination,” Chidera Ogbonna praised. “After many discussions with Ali, he has expressed his goal of applying what he learned during his summer research at UT Austin to future research opportunities, striving to be better in every way possible.”

As the school year progresses and more students take up research positions, the KGSP anticipates more students will take part in interesting research projects and showcase their expertise in scholarly publications.

Below are additional KGSP students who have published research:

Lama Bahanan, a senior majoring in Biomedical Engineering at the Georgia Institute of Technology, and Shaden Alshammari, a junior majoring in Mathematics with Computer Science at the Massachusetts Institute of Technology, were accepted into the Carnegie Mellon Robotics Institute Summer Scholars (RISS) REU.  Lama co-authored “User Centered Approach for Developing a Robot Assisted Femoral Vascular Access Device for the Battlefield” and, Shaden co-authored “Class-Imbalanced Learning via Bilevel-Optimized Weight Decay” which were both published in RISS’s Fall 2021 issue of Working Papers Journal.